Notable Swiss child development theorist, Jean Piaget, explained learning as a continual process of achieving equilibrium, or balance, in our state of “knowing”…Then that balance is challenged when we encounter new stimuli, resulting in disequilibrium. When this happens, we try to apply our existing schemas (knowledge or ways of knowing) to the new stimuli (assimilation).  We also seek and adopt entirely new schemas (accommodation).  We tinker with all of this until we achieve that state of balance, or equilibrium once again.  (Until the next time we encounter new stimuli…)

Disequilibrium, also known as cognitive dissonance, is not a very comfortable state to be in.  It can feel frustrating, and challenging.  It can cause fear, anxiety, and even panic. It is, however, necessary for true learning to take place. If we never encounter anything that challenges our current ways of thinking or knowing, then we never move forward. We never get smarter, more adept, more diverse, more eclectic, and that seems like such a dull place to be!

Since I started learning how to code, I’ve been thinking a lot about disequilibrium. END_OF_DOCUMENT_TOKEN_TO_BE_REPLACED

Frances and David Hawkins were a husband and wife team of teacher and educational philosopher, whose work transcends time and place.  She was a teacher, deeply observant of children’s learning processes.  He drew upon her observations and writing to develop a philosophy of education, ranging from the specifics of the adult/child learning relationship to the higher domains of public education policy. Together, their writings informed a generation of education professionals, and programs, worldwide.

The ways children learn have not changed since Frances and David wrote during the latter half of the 20th century. Because their teaching approaches and theories are independent of transient technologies, they remain as cogent and universally applicable today as when they were written.

David began his career as a scientist and philosopher. Following his position as official historian of the Manhattan Project, (which developed the atomic bomb), he became extremely concerned with the forces that scientists had unleashed, and turned to education as a means of humanizing society. Among his intentions was to provide a framework in which children could develop sustained curiosity and excitement about nature and science.

David based much of his writing on a few central tenets: that children learn most deeply when they are following their natural curiosities; that teachers are best able to engage in the child’s curiosity-based learning when they too have engaged in like experiences; that children are naturally prepared for early science and math learning regardless of social class advantages, and that early literacy in science and math is the gateway both to most other subjects, and to an ethic of lifelong learning. His works are passionate proposals for curiosity-based learning, how adults can engage in it with children, and why educational systems should support it.

Hawkins Centers of Learning is an organization dedicated to extending the work David and Frances (who are now passed away), and bringing their work into the twenty-first century. The work of these two important educators has been hugely influential in my teaching (and learning) career, and I would like to dedicate space to sharing some of their big ideas and examining how their thinking can impact learning to code.

Messing About is a three-phase cycle of teaching and learning proposed by David in his 1965 essay “Messing About with Science”, which I highly recommend, and can be found here. The three phases are:

Circle Phase: A time for unguided exploratory play and exploration of materials and ideas. The hands-on component is important here. For example, to learn about gravity, leaners might be offered a variety of ramps, tubes, balls, and wheels, and encouraged to explore the properties freely.

Triangle Phase: In this phase, a direction is chosen and explored more in-depth. For example, learners might create a goal of building a ramp that a ball can roll down continuously, but contains curvature so the ball’s path can end directly underneath where it started.

Square phase: In this phase, the ideas explored can be unpacked and discussed. For example, learners who explored rolling can reflect on challenges they faced and successes they experienced. They can discuss the scientific principles encountered and make plans for further explorations. 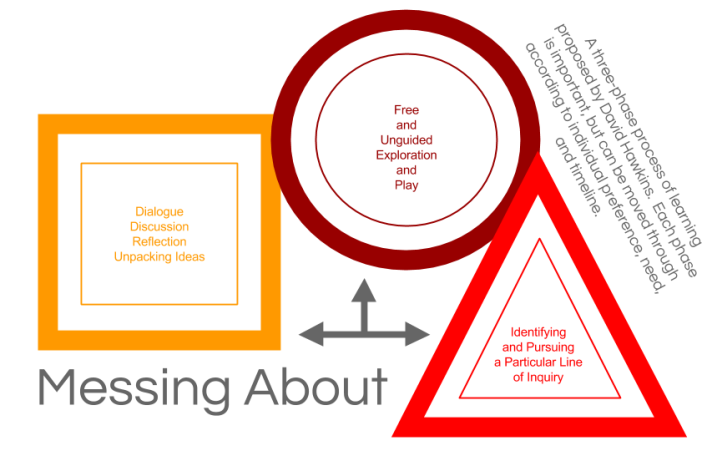 END_OF_DOCUMENT_TOKEN_TO_BE_REPLACED

Do you view yourself as bad at math? Bad with technology? Incapable of understanding computer code?

Great news!  These things are only true if you continue to believe them! If you change your messages to yourself, you will be more than capable of being good at math, good with technology, and capable of understanding computer code (among any number of other possible things you could choose to learn).

Excerpt from article by Maria Popova: Fixed vs. Growth: The Two Basic Mindsets that Shape Our Lives: END_OF_DOCUMENT_TOKEN_TO_BE_REPLACED

If metacognition can be considered a hobby, then it is definitely one of mine. (I fully realize how nerdy that sounds.)

I love thinking about thinking! When you work with young children, you have to become a “thought detective”. Young children’s brains are developing so quickly and efficiently, and teachers have to know how to support that. We have to be able to speak and interpret lots of different languages, many of which are nonverbal.  In order to do this, we have to really dig deep into our own analytical brains and constantly evaluate and reevaluate things we see happening in front of us.

We have to be able to think about children’s thinking, but also about our own! END_OF_DOCUMENT_TOKEN_TO_BE_REPLACED

I have been focusing pretty singularly on learning Ruby, but have noticed that the tutorials are getting harder for me to work through. Of course this is expected, but I find that when my brain gets overloaded, it’s helpful to take breaks. I try to keep my breaks productive by and working on something easier, totally different, but still coding: Logo.

I’ve worked through the Logo lessons on Turtle Academy, and think it’s fun to go back to the Logo play ground and draw pictures. This gives me a chance to give my memory a workout, do something I love (draw), and feel successful.

A friend who knows I’ve been playing with Logo lent me a great book called Mindstorms: Children, Computers, and Powerful Ideas, by Seymour Papert, one of the inventors of the Logo programming language. I started reading it today, and was blown away by the relevance of the ideas, even though the book was written in 1980. END_OF_DOCUMENT_TOKEN_TO_BE_REPLACED

Should everyone learn to code? Maybe, maybe not…but that is not exactly what I aim to debate on this blog (although I welcome the debate if it happens!)

I do, however, believe that every child should have a shot at understanding and learning about coding. Because of that, I’ve come to believe that in the not-too-distant future, teachers will need to know something about computer programming. We should know what code is, know how to write some of it, and know about the types of thinking it takes to successfully write code.

Further, How can teachers support the interests and curiosities if they themselves have no idea what coding is or how it can be used?  We can sit children in front of computers with Hour of Code, or a Scratch tutorial, but if we ourselves don’t know what they are doing, how can we help and support them?  Are we really being good teachers?

I think much of the debate around “should everyone learn to code?” largely misses the point.   END_OF_DOCUMENT_TOKEN_TO_BE_REPLACED

Ruby has quickly become my language of choice. There’s something about it that just draws me. It might be because I’ve started reading “Why’s Poignant Guide to Ruby”, and he agrees it’s important to submit to something that draws you.

Not familiar?  Here’s a passage:

“This world’s too big for such a a little language, I thought. Poor little thing doesn’t stand a chance. Doesn’t have legs to stand on. Doesn’t have arms to swim.”

…”So, now you’re wondering why I changed my mind about Ruby. The quick answer is: we clicked.

Like when you meet Somebody in college and they look like somebody who used to hit you in the face with paintbrushes when you were a kid. And so, impulsively, you conclude that this new Somebody is likely a non-friend. You wince at their hair. You hang up phones loudly during crucial moments in their anecdotes. You use your pogo stick right there where they are trying to walk!

END_OF_DOCUMENT_TOKEN_TO_BE_REPLACED

“Dispositional thinking is about changing the focus from learning being something you are good or bad at, to something that is learnable and changeable, something that you can practice and improve; moving from a fixed mindset to a growth mindset. It’s about developing the skills that support learning and are, at the same time, invaluable in 21st century workplaces.”

This empowers me as I bumble through my personal journey to learn to code, and is something I’d like to think more about. However, I think the ideas presented here are relevant in a much broader sense for all teachers, teacher educators, and beyond!

If you have comments, please post them on the original page.