I have been focusing pretty singularly on learning Ruby, but have noticed that the tutorials are getting harder for me to work through. Of course this is expected, but I find that when my brain gets overloaded, it’s helpful to take breaks. I try to keep my breaks productive by and working on something easier, totally different, but still coding: Logo.

I’ve worked through the Logo lessons on Turtle Academy, and think it’s fun to go back to the Logo play ground and draw pictures. This gives me a chance to give my memory a workout, do something I love (draw), and feel successful.

A friend who knows I’ve been playing with Logo lent me a great book called Mindstorms: Children, Computers, and Powerful Ideas, by Seymour Papert, one of the inventors of the Logo programming language. I started reading it today, and was blown away by the relevance of the ideas, even though the book was written in 1980. It also seemed strangely synchronous to encounter writing connecting Piaget with learning to program the day after I wrote a post about disequilibrium.

I can’t help but share some passages that I encountered, and currently have my mind swimming:

“In many schools today, the phrase ‘computer aided instruction’ means making the computer teach the child.  One might say the computer is being used to program the child. In my vision, the child programs the computer and, in doing so, both acquires a sense of mastery over a piece of the most modern and powerful technology and establishes an intimate contact with some of the deepest ideas from science, from mathematics, and from the art of intellectual model building.” (p. 5)

“Programming a computer means nothing more or less than communicating to it in a language that it and the human user can both ‘understand.’ And learning languages is one of the things that children do best.  Every normal child learns to talk.  Why then should a child not learn to talk to a computer?” (p. 6)

“I take from Jean Piaget a model of children as builders of their own intellectual structures.  Children seem to be innately gifted learners, acquiring long before they go to school a vast quantity of knowledge by a process I call ‘Piagetian learning,’ or ‘learning without being taught.’ For example, children learn to speak, learn the intuitive geometry needed to get around in space, and learn enough of logic and rhetorics to get around parents — all this without being ‘taught.’ We must ask why some learning takes place so early and spontaneously while some is delayed many years or without deliberately imposed formal instruction.

If we really look at the ‘child as builder’, we are on our way to an answer.  All builders need materials to build with.  Where I am at variance with Piaget is in the role I attribute to the surrounding cultures as a source of these materials.  In some cases the culture supplies as a source of these materials. In some cases the culture supplies them in abundance, thus facilitating constructive Piagetian learning.  For example, the fact that so many important things (knives and forks, mothers and fathers, shoes and socks) come in pairs is a ‘material’ for the construction of an intuitive sense of number.  But in many cases where Piaget would explain the slower development of a particular concept by its greater complexity or formality, I see the critical factor as the relative poverty of the culture in those materials that would make the concept simple and concrete. In yet other cases the culture may provide materials but block their use.  In the case of formal mathematics, there is both a shortage of formal materials and a cultural block as well. The mathophobia endemic in contemporary culture blocks many people from learning anything they recognize as ‘math,’ although they may have no trouble with mathematical knowledge they do not perceive as such.”

We shall see again and again that the consequences of mathophobia go far beyond obstructing the learning of mathematics and science.  They interact with other endemic ‘cultural toxins,’ for example, with popular theories of aptitudes, to contaminate people’s images of themselves as learners.  Difficulty with school math is often the first step of an invasive intellectual process that leads us all to define ourselves as bundles of ‘aptitudes and ineptitudes, as being ‘mathematical’ or ‘not mathematical’, ‘musical’ or ‘not musical’, ‘profound’ or ‘superficial’, ‘artistic’ or ‘not artistic’, ‘intelligent’ or ‘dumb’.  Thus, the deficiency becomes identity and learning is transformed from the early child’s free exploration of the world to a chore beset by insecurities and self-imposed restrictions.

Two major themes — that children can learn to use computers in a masterful way, and that learning to use computers can change the way they learn everything else — have shaped my research agenda on computers and education.” (p. 7-8)

These issues are all still being debated and discussed today, nearly 25 years later!  I wonder what has changed between then and now, but also what has stayed the same.

How is it that in a modern world where technology speeds up and becomes obsolete so quickly, these vintage ideas have withstood the test of time? Should be be saddened or encouraged by this? (or both or neither?) 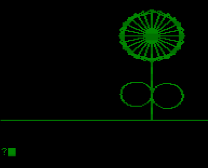 One thought on “A Disequilibrium Reprieve and a History Lesson: Logo”