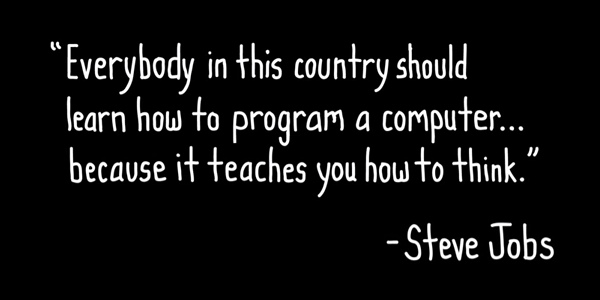 Should everyone learn to code? Maybe, maybe not…but that is not exactly what I aim to debate on this blog (although I welcome the debate if it happens!)

I do, however, believe that every child should have a shot at understanding and learning about coding. Because of that, I’ve come to believe that in the not-too-distant future, teachers will need to know something about computer programming. We should know what code is, know how to write some of it, and know about the types of thinking it takes to successfully write code.

Further, How can teachers support the interests and curiosities if they themselves have no idea what coding is or how it can be used?  We can sit children in front of computers with Hour of Code, or a Scratch tutorial, but if we ourselves don’t know what they are doing, how can we help and support them?  Are we really being good teachers?

I think much of the debate around “should everyone learn to code?” largely misses the point.  Many arguments debate whether not we should be nurturing more computer scientists and professional programmers.  Rather than engaging in this black and/or white conversation, we should be leaning toward understanding the complexities of the space between the two views.

More and more jobs are simply going to incorporate programming in small ways. It will serve our future workforce to be able to speak the language of programming, and know something about programming languages. I already see this happening. I’ve spoken with several individuals who are NOT professional programmers, but who feel that knowing something about computer programming makes them better at their profession.

These individuals were not told they must code, they simply realize that coding is a valuable tool that enhances their lives and careers.  In fact, the businessman calls coding his “secret weapon”.  I don’t see this trend slowing, but rather speeding up.  I believe all careers will be enhanced by employees who are knowledgeable about coding…including teaching.

I think all children should at least have the opportunity to play with coding, and be supported by teachers who are positive, supportive, and knowledgeable enough to scaffold that learning. What do you think?

Here are some interesting articles that speak to “”should or shouldn’t everyone learn to code” debate. If you check these out, I encourage you to read them in-full, including comments, because very interesting points on both sides are made and debated. (…and in most, the complexity of the middle is what really comes across.)

Maybe Not Everybody Should Learn to Code: A Software Engineer’s Take on the New Education Call to Arms, by Chase Felker

I’m not sure it’s even possible to teach everyone how to code, but I do know that to mandate programming as a general education requirement would displace something else that we’re already failing to teach, and that’s not good, either. We don’t need everyone to code—we need everyone to think. And unfortunately, it is very easy to code without thinking.

Linux creator Linus Torvalds: I do not believe everybody should learn to code, by Harrison Weber

While enthusiasm for computer science is high — even President Obama is into it — many developers have reacted negatively to learn-to-code campaigns. The pervading counterargument, it seems, simply claims that programming isn’t for everyone.

However, Torvalds clarified that “there may well be lots of people who never realized that they might actually like telling computers what to do.” For this, he says, “computer courses in schools are a great idea” — even if he doesn’t “believe in the everybody-should-learn-to-code thing.”

To those who argue programming is an essential skill we should be teaching our children, right up there with reading, writing, and arithmetic: can you explain to me how Michael Bloomberg would be better at his day to day job of leading the largest city in the USA if he woke up one morning as a crack Java coder? It is obvious to me how being a skilled reader, a skilled writer, and at least high school level math are fundamental to performing the job of a politician. Or at any job, for that matter. But understanding variables and functions, pointers and recursion? I can’t see it.

No, Not Everyone Needs to Learn to Code – But Here’s What They Should Know, by Gregg Pollack, Founder of Code School

Over the last few years we’ve heard time and again that we should all be queuing up our terminals and learning how to program. Even the President’s getting involved, and for good reason: Learning to code can be incredibly rewarding, give you a new appreciation for technology and introduce countless career opportunities. In fact, software development jobs are expected to grow 22 percent between 2012 and 2022–significantly higher than other occupations.

3 thoughts on “Should Everyone Learn to Code?”